The Stoning of Stephen - the First Christian Martyr 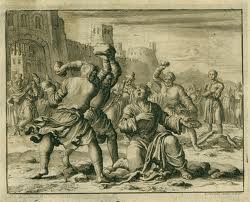 The First Christian Martyr - the Stoning of Stephen
It had just been a year or so since Jesus had gone back to heaven and left the Holy Spirit to guide and infill His followers, and already so much was happening. Those first new Christians cared about each other so much and were so guided by the Holy Spirits’ power that very soon thousands of their neighbors in Jerusalem believed in Jesus and became Christians as well. There were hundreds of healings and miracles in their prayer meetings, so many that all of Jerusalem was talking about these amazing Christians and becoming disciples of Jesus also.

It was during these early days when the new Christian church was taking shape that we first hear about Stephen. Stephen was a member of that very first church and was chosen along with six other men to wait on tables and serve meals to the widows who belonged to the families of the church members. (Acts 6:1-5)

The early Christians felt that it was their job to be sure that the women without husbands in their midst didn’t go hungry. This may seem strange to us today, but providing for the widows made sense back then. In that culture, the men held the purse strings and the women had little or no control over their own finances. When a husband died, the family inheritance would go to the son or sons. And since the wife would not be able to keep her husbands’ money, her sons would be expected to take care of her.

Since the early church members shared everything in common, they shared their responsibilities in common too. And taking care of their widows was one of their responsibilities. This responsibility was so important to the group that they wanted their very best Christian men to wait on their widows. Let’s listen: “Brothers, choose seven men from among you who are known to be full of the Spirit and wisdom. We will turn this responsibility over to them,…This proposal pleased the whole group. They chose Stephen, a man full of faith and of the Holy Spirit,…” (Acts 6:3 and 5a)

We don’t know how many months or years Stephen served the church by waiting on tables and serving meals to the widows, but Scripture does tell us a little more about him and about his faith. “Now Stephen, a man full of God’s grace and power, and he did great wonders and miraculous signs among the people,” (Acts 6:8) And also Stephen must have been a good looking guy because the Bible says: “…they saw that his face was like the face of an angel.” (Acts 6:15b) Stephen was such a help to everyone and such a power house for God. He was a man of integrity who went about and shared his faith, but then the trouble came!

Stephen began preaching and discussing the Scriptures in the Synagogues around Jerusalem and some of the Jews who heard him began to spread lies about what he was teaching. “They secretly persuaded some men to say, ‘We have heard Stephen speak words of blasphemy against Moses and against God.’ So they stirred up the people and the elders and the teachers of the law. They seized Stephen and brought him before the Sanhedrin. They produced false witnesses, who testified, ‘This fellow never stops speaking against this holy place and against the law. For we have heard him say that this Jesus of Nazareth will destroy this place and change the laws Moses handed down to us.’”. (Acts 6:11-14) Sadly the religious leaders were the ones who spread the lies about what Stephen was teaching. One of the falsehoods they told was that Stephen was blaspheming or trying to do away with the laws of Moses. They must have thought that they were protecting the laws of Moses by lying about Stephens’ teaching. But these religious leaders were breaking the very laws that they claimed to be standing up for. They were breaking one of their own Ten Commandments by lying and bearing false witness. The ninth commandment reads: “You shall not give false testimony against your neighbor.” (Exodus 20:16) People in the name of God are still breaking that commandment today!

Stephens’ angry accusers brought him before the Sanhedrin for questioning. Caiaphas, the same high priest who had condemned Jesus a few years earlier, was still in power when Stephen came in for questioning. Stephen stood up before the religious leaders and went through the Old Testament scriptures pointing out how the prophets had foretold the coming of Jesus the Savior, the Righteous One, and the One who they had rejected and killed. (Acts 7:1-53 – Stephens’ sermon to the Sanhedrin)

When the religious leaders heard Stephen say that Jesus was the Righteous One that they had killed, they flew into a rage. And then everything happened quickly. The furious priests grabbed Stephen and started dragging him out of the city to kill him. It must have been a frightening scene to see this crazed mob yelling and shouting accusations as they shoved and pulled Stephen through the streets of the city and on to his death. As the men were hitting him and jerking him along Stephen looked up into heaven and saw a vision. “’Look,’ he said, ‘I see heaven open and the Son of Man standing at the right hand of God.’” (Acts 7:56)

The enraged men yelled the more and covered their ears so they couldn’t hear Stephens’ words as they pulled him along. Finally when they got outside the city they picked up stones and surrounded Stephen for the kill. Saul, who later became a Christian and was re-named Paul, was there with the group giving his approval for the stoning and holding the coats of the men who were throwing rocks at Stephen. (Acts7:58b and 8:1) It was a dreadful day!

Scripture tells the story of Stephen’s death. “While they were stoning him, Stephen prayed, ‘Lord Jesus, receive my spirit.’ Then he fell on his knees and cried out, ‘Lord, do not hold this sin against them.’ When he had said this, he died.” (Acts 7:59-60) Amazingly right in the middle of this bloody and brutal stoning, he prays for forgiveness for his killers! Stephen was the first Christian to die for his faith in Jesus. And since then there have been many more Christians who have been martyred for their faith.

Right after Stephens’ death, the rest of the Christians in Jerusalem also became targeted for trouble. “On that day a great persecution broke out against the church at Jerusalem, and all except the apostles were scattered throughout Judea and Samaria. Godly men buried Stephen and mourned deeply for him. But Saul began to destroy the church, going from house to house; he dragged off men and women and put them in prison.” (Acts 8:1-3)

You would think that the leaders in Jerusalem would be happy that Stephen and the other Christians were living there among them. The sick were being healed and the hungry were being fed. Why would anyone have a problem with that? But unfortunately the same religious leaders who killed Jesus were still in power, and they also wanted to kill these new Christians. Jesus had already warned them that they would be persecuted if they followed Him, and the warning is there for us too. “If the world hates you, remember that it hated Me first. If you belonged to the world, it would love you as its own. As it is, you do not belong to the world, but I have chosen you out of the world. That is why the world hates you. Remember the words I spoke to you: ‘No servant is greater than his master. If they persecuted Me, they will persecute you also.” (John 15:18-20a)

It’s easy for us to forget that we may experience rejection by others if we follow Christ. We have been given warnings about this throughout Scripture, but we still can feel surprised when people, even family members, turn against us for seemingly no reason. One of the beatitudes also reminds us to expect persecution. “Blessed are you when people insult you, persecute you and falsely say all kinds of evil against you because of Me. Rejoice and be glad, because great is your reward in heaven, for in this same way they persecuted the prophets who were before you.” (Matthew 5:11-12)

I hope none of you will ever have to suffer persecution because of your faith in Christ. But if you do, just remember that you are in good company, since many Christians down through the ages have had to take up their cross to follow Jesus. Persecution is never an easy thing. But if you are rejected or persecuted because of your faith, just consider it to be an honor.

Labels: The First Christian Martyr - The Stoning of Stephen