Jacob Blesses His Twelve Sons - and curses some of them 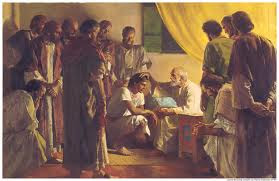 
(and curses some of them)


Jacob knows that he is dying. All 147 years of his busy life he has followed his God – the God of his father and grandfather, Isaac and Abraham.  But now the end is near. Jacob calls his twelve sons to come together so that he can prophesy over them, bless them, curse certain ones, and give each one a prediction of future events for themselves and their descendants. Jacob prays and trusts that God will guide his words as he begins.

The year is approximately 2000 B.C. and it was the custom in ancient times for the first-born son to inherit special rights and privileges that the younger sons would not be given. After the twelve sons are assembled, Jacob begins by calling his first-born son, Reuben in to receive his special first-born blessing.

But Jacob cannot completely trust Reuben to act as a family member should act.  Reuben’s place as the favored firstborn will be given to Joseph.  His privileges as priest are to pass to the sons of Levi.  And his right to be the head of the tribes of , or his kingly right as a first born, will go to . Reuben will no longer be treated as special.

Years earlier Reuben had dishonored his father.  Now the elderly father bending over his first born son speaks these words: “Reuben, you are my firstborn, my might and the beginning of my strength.  The excellency of dignity and the excellency of power.  Unstable as water, you shall not excel.  Because you went up to your father’s bed: then you defiled it.  He went up to my couch.”  (Genesis 49:3-4)

Instead of an extra blessing for being the firstborn, now Reuben seems to receive a rebuke, or a curse! Jacob tells him that he –and his descendants will not excel –after telling him that he had dignity and power.  but, even so he will not excel!  And in the future Reuben’s’ descendants would become a pastoral people living east of . (Num.32:1-33)  And no king or great leader came out of the tribe of Reuben some Biblical authors believe.

Jacob had been so proud of Reuben, and had held so many expectations for this baby boy of his, this first born! Surely Reuben would learn to love God the way he did and grow up to walk in God’s ways. Jacob would teach him to follow God. Back then Jacob had been the big strong Daddy, the young shepherd, the gallant warrior, the one who made everything happen. And when Reuben was little he loved and respected his wise and powerful Daddy.

But the years passed by and Reuben grew older and stronger and soon could lift heavier loads than his Dad.  And as more time went by he even owned more sheep than his father. Jacob’s hands were beginning to shake and his hair was turning grey as each year he was becoming weaker and less powerful.  While Reuben grew up tall and good looking and each year he was becoming stronger and more powerful. And the famine in the land had left Jacob a poor and desperate man, hardly able to feed his large family.

And it was at about this time while Jacob was away tending the sheep that Reuben walked into his father’s tent and raped Bilhah, his father’s concubine.  So what was the big deal? Reuben asks.  Dad had lost the wealth and power he once had.  He had no wealth or lands left to leave to his sons.  So why should he still get respect or honor from Reuben?

Reuben leaves after his father’s prophecies and Jacob, trembling a bit calls to his next two sons, Simeon and Levi, and the two men come in and kneel before their father as he leans on his cane and begins prophesying over them.  He says: “Simeon and Levi are brothers, Instruments of cruelty are in their dwelling place.  Let not my soul enter their council: Let not my honor be united to their assembly:  For in their anger they killed a man.  And in their self will they hamstrung an ox.  Cursed be their anger, for it is fierce.  And their wrath, for it is cruel!  I will divide them in Jacob and scatter them in .”  (Genesis 49:5-7)

These sons of Jacob were brothers in violence.  Jacob could not forget their cruel massacre of the Shechemites, - a whole village of people years earlier.  It was so horrible and blood thirsty.  Jacob had not taught his sons to behave this way!  Now their father was telling them that they were not to have territory they could call their own, but would be dispersed among the other tribes.  In Canaan this was fulfilled: the children of Simeon were later swallowed up into the tribe of and the Levites had no territory assigned to them but they served as ministers of the sanctuary and teachers of .

Jacob calls in his fourth son, Judah, who receives praise from his father.  would carry the hope of upon his person.  He would be feared by his enemies because as a lion he would have power.  ’s land would be divinely blessed.  Jacob tells “The scepter shall not depart from Judah, or a lawgiver from between his feet.  Until comes: and to Him shall be the obedience of the people.” (Genesis 49:10)  Jacob’s prediction was fulfilled in the fact that Shiloh (the peaceful One – or the Messiah, Jesus) was to come from the line of .  Both Mary and Joseph could trace their lineage through Judah and so of course Jesus also.

Two more sons, Zebulun, son number five  and Issachar, number six are blessed by their father. “Zebulin shall live by the haven of the sea and become a haven for ships …”  (Gen.49:13) Jacob declares.  And it seemed to happen that way as the future unfolded.  And then to Issachar, son number six, Jacob describes him thusly: “Issachar is a strong donkey.  Lying down between two burdens:  He sees that rest is good….He becomes a band of slaves.”  (Gen.49:14-15)  Was Jacob predicting that Issachar would submit to Canaanite invaders who would force them to become slaves?  This was to be their fate in future years.

Then Jacob calls for his seventh son Dan.  “Dan shall judge his people…Dan shall be a serpent by the way, a viper by the path…”  (Gen.49:16-17a)  Later the tribe of Dan lived in the northernmost point in and they were a strong defender of their own people.  And they were feared by their neighbors.  After Dan Jacob calls Gad, son number eight  to himself and says: “Gad, a troop shall tramp upon him, but he shall triumph at last.”  (Gen. 49:19)  The strong bravery of this son would also live in his descendants.  The tribe of Gad would be a strong help to all of in keeping their many enemies at bay.  Gad would be continually attacked by desert tribes but they would be victorious and able to drive their enemies away.

Next Asher, son number nine, comes to his father for his blessing.  Jacob speaks these words.  “Bread from Asher shall be rich.  And he shall yield royal dainties.”  (Gen.49:20)  In the future his tribe was prosperous!  Son number ten - Naphtali came next to his father to be blessed.  All Jacob said to him was: “Naphtali is a deer let loose: He uses beautiful words.”  (Gen. 49:21)

Next it is Joseph’s turn.  Joseph, the eleventh son, receives the highest praise from Jacob of all the sons.  Joseph has always been loyal to God which pleases his father so much.  Joseph has forgiven his brothers for selling him into slavery in .  He told his brothers that God had turned that bad act around for their good.  Now the whole family is living in   since the severe famine has driven them there.  Jacob tells Joseph that he is a fruitful bough. (Gen. 49:22-26)  That the archers have bitterly grieved him and shot at him and hated him.  But that his arms and hands will be made strong by Mighty God and that God will bless him and keep him through his many persecutions. Joseph was very close to God but because of this he also had many persecutions!

And the last son, Benjamin, son number twelve finally comes forward and bows before his father.  Jacob predicts that Benjamin will be a ravenous wolf.  Ehud, Saul and Jonathan were among the later descendants of Benjamin who were great warriors who fought off the enemies of .  When Jacob is finally finished blessing and sometimes  rebuking each of his twelve sons, he speaks to all of his sons telling them where he wants to be buried. and then Jacob climbs into his bed and dies.

This passage in Genesis allows us the privilege of peeking into the personal life of Jacob- the patriarch who God re-named , the man who wrestled with God, the dying father, as he says goodbye to his sons. We can see that parenthood four thousand years ago wasn’t all that different from what it is now.  There are thrills and heartaches, joys and pitfalls in this job of being a parent. And having twelve sons, Jacob is so proud of some of them, happy with others and disillusioned and disappointed with several more.

Were the words that Jacob spoke over each son words from God or just Jacob’s observations as a father?  Or both?  Did his prophecies come true or were they just a father’s guesses?  We don’t have all of the answers.

Jacob seemed to curse several of his sons – Reuben would not excel, Levi and Simeon would not have territory they could call their own. What does this mean?  Was God behind those predictions- those prophecies?  Or was this part of Jacob’s anger?  Jacob and his sons lived during the strict Age of the Law. This was the legalistic age when “an eye for an eye and a tooth for a tooth” was the way things were done. The age when a lamb was slaughtered often for the sin of the people. The age when prophets foretold doom on sinful kingdoms.  People could not come near their holy God.  Men of God often gave blessings on some and cursed others. Blessings and cursing.

But now we live in a totally new age - the Age of Grace.  We have passed from the Age of Law.  We have new freedom through Christ.  Jesus the perfect Lamb of God has died and risen again.  He has taken away our sin, paid the price for us, the curtain in the temple has been ripped in half.   We can now come into the presence of  God.  We have grace upon grace. Everything is different now because of Jesus Christ!

As children of God in this Age of Grace we are instructed to bless but not to curse. Romans 12:14 says: “Bless those who persecute you, Bless and do not curse.”  Like Jacob, parents today still hope to leave their children with good life lessons – a good foundation to build on. We hope to leave them good memories and we leave them our love.  But if we can’t go along with the choices that some of our children have made, we are not to leave them a curse but we can leave it with God.