What Does Being "Born Again" Mean? 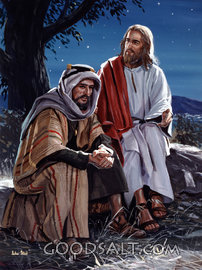 What Does Being “Born Again” Mean?


One night Nicodemus sneaks outside looking for Jesus.  Nicodemus is a Pharisee –a Jewish religious leader and he wants to talk to Jesus since he believes that Jesus has come from God.  All of Jesus’ many miracles and healings have caused Nicodemus to believe this.  Nicodemus wants to know how to be close to God so when he finds Jesus and asks how he can find God, Jesus answers Nicodemus this way: “  A person cannot see (enter) the unless he/she is ‘born again’.”  (John 3:3)

Nicodemus is astounded at Jesus’ words!  “Can an adult enter his mother’s womb again to be born?” he asks Jesus.  And Jesus answers him: “I tell you the truth, no one can enter the unless he is born of the water and the Spirit.  Flesh gives birth to flesh, but the Spirit gives birth to spirit.  … The wind blows wherever it pleases.  You hear its sound, but you cannot tell where it comes from or where it is going.  So it is with everyone born of the Spirit.”  (John 3; 5,6,8)

“How can these things be?”  Nicodemus asks. (John 3:9)  What is Jesus talking about?  Nicodemus is totally confused now.  He just wanted a simple straight forward answer from Jesus.   Just tell me what I need to do to be part of Gods’ kingdom and I will do it. – Step 1, Step 2 and Step 3.”  But Jesus goes on insisting that a person needs to be born again by the Spirit to enter God’s kingdom!

And that the Spirit is like the wind and no one knows where the wind comes from or where it goes.  And so it is with everyone that is born of the Spirit!  We can’t imagine all  that God does to bring us into His kingdom. God want to draw every single one of us back to Himself and He is out constantly looking for ways to bring His lost sheep home..  What does all this mean?   Nicodemus is still shaking his head!

Nicodemus seems to think that entering God’s kingdom is our job and we humans need a formula or maybe better instructions as to how to work our way there.  Have we worked hard enough?  Are we good enough?  But Jesus seems to be telling Nicodemus that no person can be a part of God’s kingdom by his/her own good deeds or work. . Without the Holy Spirit doing His work- the mysterious work of giving the person a new spiritual life, the person will not be able to enter the kingdom on his own.  And Jesus emphasizes that the Spirit is like the wind and everyone who has been born again into God’s kingdom has been brought in by this mysterious Spirit that we can’t even track or follow.

If we had been standing there with Nicodemus that night, would we be as confused as he was?  Is Jesus muddying the waters with this ‘born again’ talk and saying that we can’t reach salvation on our own, but this mysterious Spirit has to give us new birth!  (John 3:5)  And we don’t even have a tight control on the Holy Spirit since He is like the wind?!  Nicodemus is uncomfortable.  He likes to be in control.

Jesus keeps on talking with Nicodemus.  “No one has even gone into heaven except the One who came from heaven – the Son of Man.”  Jesus tells him.   (John 3:13)  Is Jesus saying that we can’t find heaven on our own?  Heaven is a spiritual place– and we need to be born of the Spirit to fit into His heavenly spiritual kingdom.  We had to be born of flesh and blood to be part of this earthly kingdom.  If God lit our light and gave us birth into this earthly kingdom, can we trust Him to give us a second birth into His heavenly kingdom too if we want that?

Jesus seems to be telling Nicodemus that we may decide to follow Christ and we may open our heart to God, but along with our part there is an unseen action on the part of the Spirit in our entering God’s kingdom that we cannot see or explain.  Let’s follow the story of a woman who believed in Jesus – was “born again” and afterwards her life was changed drastically.  Let’s look in on her conversion experience and listen to her story of being “born again.”

Joseph Bentz in his book, God in Pursuit  tells the story of how Mary Beard came to Christ.  Today this woman is an active Christian.  Mary’s mother was a Christian but her childhood was miserable because her father was mean and abusive toward her.  By the time Mary reached her twenties she had become an angry rebellious young woman.  She stumbled into a life of crime that landed her on the FBI’s Ten Most Wanted list.  Mary shoplifted, stole cash from the Mafia, robbed banks and cracked safes and helped her husband try to make an escape from jail.  Finally at age twenty eight she herself was sentenced to twenty-one years in prison for the crimes of armed robbery and grand larceny.

Mary hit a low point when she was put behind bars.  She began attending church services on Sunday mornings and weekly Bible studies on Tuesday afternoons just to escape the boredom of being in her prison cell.  She determined to be as difficult as possible at her Tuesday Bible studies and mess up the church services as much as she could.  Mary had never liked church or Bible study when she was younger. But Mary was depressed and anxious now that she was behind bars.  Her insecurities seemed to be leading her to be more willing to come to God.

One day after she had attended a Tuesday Bible study Mary returned to her cell and picked up a Gideon Bible and began looking through it.  For the first time in her life she was feeling guilty and remorseful for all the crimes she had committed and the rebellious life that she had been living.  Perhaps the Holy Spirit was speaking to her heart, because Mary was finally wondering how she could change her life.  .

Flipping through the pages of the Gideon Bible she landed on Ezekiel 36:26-27. And then these words jumped out at her: “A new heart also will I give you, and a new spirit will I put within you:  and I will take away the stony heart out of your flesh and I will put my Spirit within you, and cause you to walk in my statutes, and you shall keep my judgments, and do them.”

The words of this verse lit up in her soul and came to life as if filled with the presence of the Holy Spirit.  Mary knew that God was speaking directly to her through this Scripture verse and this was a turning point for her.  She realized that God was the one doing the action.  It was not up to her to make herself good enough.  She did not have to do anything but show up and say yes and receive.  God would empower her to do what He wanted her to do.  She knelt down in her prison cell and prayed and asked the Lord to give her the new heart that the verse talked about and make her a new person – whatever He wanted her to be.

Mary tells that she felt a tremendous peace come over her there in her cell and she knew that she belonged to Jesus Christ.  Her rebellious spirit disappeared and her life changed.   God indeed gave her a new heart – a heart that loved other people and loved Him..

While Mary was in prison she watched as her fellow prisoners would often worry about their children – the children that they had had to leave behind when they were sentenced  to prison.  At Christmastime these inmates would grieve and cry because they couldn’t be home with their babies.  Home to put up a tree and give their little ones love and gifts and toys.

When Mary got out of prison she began a Christian ministry –she founded “Angel Tree,” –a ministry where thousands of people now have the opportunity to pick an “angel” or the child of a parent in prison or a parent who cannot afford gifts.  Others can give Christmas to a little one who would not have a Christmas otherwise.  Mary is actively serving her Lord through this organization “Angel Tree” and through her church.  She is a changed person – a “born again” person.

Jesus had more to say to Nicodemus that night long ago.  Nicodemus still did not understand the Way to salvation.  Jesus continued: “Just as Moses lifted up the snake in the desert, so the Son of Man must be lifted up that everyone who believes in Him may have eternal life. (John 3:15)  Nicodemus knew the story from Scripture and from Jewish history. He knew of how Moses had held a carved statue of a snake up high on a pole for all of the Israelites to see.

Long ago the Israelites had been traveling in the desert with Moses when problems arose. Poisonous snakes were there in the desert biting and the people who were bitten were dying.  Moses had cryed to God about the problem and God had answered and promised that if Moses would hold high the carved image of a snake for all to see that the people who were bitten would only have to look at the carved snake to be healed and saved from dying.  And Scripture records that that is exactly what happened.  Hundreds of the Israelites who were dying from these venomous snake bites were made well again by just looking at the carved snake held high for them to see.

And Jesus was telling Nicodemus that similar to a bitten and dying person looking at Moses’ carved snake and being saved back then  that now looking to God’s Son can save a person – . save the one who looks to Jesus from spiritual death by giving them a new birth in Christ.

It’s just that simple Jesus told Nicodemus.  Just look and live.  When we look – (and see) Jesus for who He is - the Son of God and our Savior, then the miracle of saving is done for us.  And Jesus continued explaining salvation to the amazed Nicodemus with these words:  “For God so loved the world that He gave His only begotten Son that whosoever believes in Him should not perish but have everlasting life.”  (John 3:16)  Our job is to open our hearts and look – and see Jesus as Son of God and our Savior and His job is to save.  It’s just that simple.