The Heavenly Father Loves You 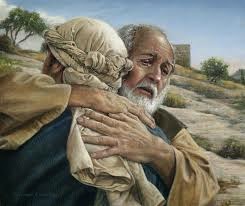 The Heavenly Father Loves You

The belief that God extends grace to each of us personally is a unique belief only of the Christian faith!  The amazing grace Christians sing about and celebrate is not part of any of the other world faith systems.  The jubilee and the rejoicing at Christmastime are missing in other faiths since the free gift of a Son and Savior are missing.  The Christian faith is like no other faith because our salvation does not depend on how good we are but on how good God is!

All of the other religions around the world expect their followers to be good.  Expect them to work towards a goal or to “do” something to gain God’s approval.  The Buddhist religion holds out the eight-fold path and the Hindu religion teaches the doctrine of the karma to their followers.  The Muslims have their code of law and the Jewish have their covenant.  In the end when the books are opened, these followers of non-Christian religions believe that their work or what they “do” during their earthly lifetime will need to measure up.

Every major religion other than Christianity offers a way for their follower to work their way up and to earn God’s approval.  Only the Christians are commissioned to spread the good news that God’s love is unconditional!  (Matthew 28:16-20)   Only the Christian faith openly broadcasts and generously offers the free gift of salvation in Jesus Christ to anyone and everyone who will take it!  (John 3:16)

The Bible says: “For by grace are you saved through faith and not of yourselves it is the gift of God, not of works lest people would boast.”  (Ephesians 2:8-9).  Scripture says that salvation is a gift God gives to us because He loves us so much.  And this gift is given through his Son, Jesus Christ!  We don’t earn this grace or work for this gift.  By faith we just receive it because we are the one He loves.

This grace God is offering seems too good to be true.  And we are used to finding a catch in things that seem too good to be true.  Just having faith seems too easy – too simple.  Just believing and receiving!  Jesus paid it all!  At least we want to pay for some of the price.  We want to work for this salvation so we can feel like we are better than the people who don’t work for it and don’t have it.  But no – Christian grace doesn’t work that way!

The younger son finds himself alone in a foreign country, cold and homeless and hungry with winter coming on. He is sick and desperate and looking for a job. Finally, after months of looking, he finds work feeding hogs where he is allowed to sleep in the dirty hog pen and eat the husks that the hogs don’t eat.  His clothes are ragged and he his has lost 40 pounds.  One cold night when he is shivering and laying there in the mud with the hogs he thinks about his Father and he starts crying.  Why did he ever leave home?  Why did he run away?  More than anything he wants to see his Father again.  And more than anything he wants to go back home.

But how can he go back home?  He has blown half of his Father’s money!  And he has done really bad things.  He doesn’t deserve to be his Father’s son any longer after all he has done.  And he doesn’t expect his Father to take him back as a son.  He will apologize and ask his Father to let him be one of the workers.  Yes, that is what he will do.

The younger son has been gone twenty long years and the lovesick Father has spent twenty long years anxiously pacing back and forth on the porch and gazing down the road.  He is straining his eyes hoping to someday see his lost boy coming back home again.  His boy is part of who he is so how can he give up on him.  The Father misses his boy so much and loves him so deeply.  Worries about him and desperately wants him to be a good person and have a good life.  The Father can never give up hope that his boy will come back home.

And then one day it happens!  The lovesick Father is on the porch as always anxious and looking down the road when he thinks he sees someone way off in the distance coming down the road!  Who could it be?  Maybe it is his son!  Maybe!  The Father feels dizzy with fear and hope and runs down the road to get a better look.  Yes, it could be his son!  Excited, he runs further down the road.  By now his hands are shaking and his heart is beating so fast he can hardly breathe.

The old man keeps running, and yes, it does look like his beloved son!  Oh my, this is all too good to be true!  Tears are pouring down the old man’s face as he rushes toward his son.  “My boy was lost, and now he’s found!  Lost and now found,” the Father keeps gasping over and over.  He grabs his son and holds on tight, crying and trembling and laughing all at the same time.

“Father, I have sinned against you and I am no longer worthy to be your son,” the son stutters out.  The Father has his arms around his boy kissing him and won’t let him go! “Hush my boy, I’ve missed you so much, love you so much!”  “Father, just let me be one of your workers,”

“My son, we will celebrate tonight.  Celebrate that you arre home.   Have a big party.  Kill the fatted calf, have a feast and invite everyone.  Make merry with fine wine and fancy cakes and music and dancing.”

“Father, I have sinned,”   “Hush my Son, You are back!  Here, take off those rags and put on my best robe and my best shoes.  Rings for your fingers, only the best for my son.  My son, my son was lost and is found! ” The Father is jubilant!  His joy knows no bounds!  He is dancing around in circles now laughing and shouting!  All the lovesick Father cares about is that his lost son is found.

Jesus tells us this story to try to tell us how much God, our Father loves us and to show us what our heavenly Father is like.  Jesus describes God as a loving and dedicated Father who rejoices and celebrates when he gets just one of his children back. Jesus says: “I tell you, there is rejoicing in the presence of the angels of God over one sinner who repents.”  (Luke 15:10)

Other stories in the Bible tell this same truth about God our heavenly Father and his great love for us.  The Shepherd who spends all night searching over hills and valleys looking for his lost sheep while leaving the other ninety nine sheep behind, is beside himself with joy when he finds his lost sheep.  (Luke 15:1-7)  Of course we are the sheep and God is the Shepherd.  And the Shepherd also throws a party to celebrate!

God’s grace and love for us is shockingly personal.  That’s what the Bible says. We are the younger son in Jesus’ story.  Our heavenly Father paces the floor and grieves for us when we reject Him and when we leave Him behind.  And our Father watches and waits for us to come home to Him so He can pour out his love on us.  When we start walking away from our old life and begin heading towards home, our heavenly Father rushes tearfully down the road to greet us.  He throws his arms around us kissing us and exchanging our dirty rags for his royal robes.  He is a merciful, generous and loving Father who is crazy about us and wants us to be with Him more than anything.  It’s hard to believe but this is the kind of heavenly Father we have!  Isn’t that wonderful?!

Some of these quotes and ideas are taken from Phillip Yancey’s book, “What’s So Amazing About Grace?”